What is this you might ask yourself? Well, these are sweet vanilla egg-pancake ‘tacos’ filled with Nutella sushi-rice pudding, red syrupy cherries, a sweet soft cheese made with powdered sugar, sprinkled with green pistachios!

And now you might ask yourself again once more: What is this???

Well, I guess I have to start a bit earlier and guide you through my crazy though process that led me to this weird but surprisingly tasty creation.

When I read this, I realized how true it all was and that the most popular posts on Instagram actually follow at least one –most even more- of these (formerly) unwritten rules.

Jokingly I mentioned to Fiya that we should have a challenge to cram as much of these ingredients together in one dish. Somehow along all this trash-talk this suddenly became an actual challenge and Jordan was eager to join in. But combining all these things into 1 dish seemed impossible.

So, Fiya, Jordan and myself came up with the following little food challenge:

I was really excited to do this challenge because it seemed so absurd to do. In line with Fiya’s 3rd rule (The odd: When you have to stare for a few seconds before realizing what you are looking at) I wanted to make a taco and a cupcake to cover all ingredients. But I wanted to flip the sweet and the savory, by making a sweet taco and a savory cupcake.

The taco would be made from a sweet pancake filled somehow with Nutella. There would be egg in the pancake batter so I already had 2 ingredients down. As I had to incorporate sushi somehow I thought I could possibly get away if I just use sushi rice. Sushi rice is a short grain rice which get’s sticky when you cook it. In Germany we have a dessert called Milch-reis (milk rice) which is a sweet rice pudding made from short grain rice cooked in milk. So I decided to make a rice pudding from sushi rice, cook it in milk and flavor it with Nutella. The taco should look like a real Mexican taco and as they are often are topped with tomatoes, avocado and cheese I wanted to resemble these colors. I chose cherries and pistachios for the red and the green.

Recently I made soft Indian paneer cheese for the first time and realized that making cheese at home isn’t that difficult after all. Paneer is a soft cheese with a creamy texture, however it does not have too much flavor on its own as it’s basically just curdled milk. I thought maybe I can try to make a sweet cheese by using the powdered sugar.

For an extra textural element I wanted to use toasted rice powder. In Thai this is called Khao Khua and is used in many salads to give it an extra nutty crunch. With hazelnuts being Nutella’s main ingredient (at least in our heads), I wanted to used crushed hazelnuts as well.

After having set my mind on this dish I wanted to start thinking about the savory cupcake, when I realized that I already had tackled all ingredients in the taco.

I thought about somehow making a hearty cupcake with a meringue or maybe potato mash as ‘frosting’. Maybe incorporating a sexy yolk-shot or using actual raw fish. But there would be no way the sweet taco and the savory cupcake would ever work together and create a whole. They would be just two weird Frankenstein dishes side-by-side…

I had already created the sweet taco – the weirdest dish I ever came up- so I decided to call it a day.

What can I say, it actually tasted pretty good!

Before you judge me, think about the different taste elements: a sweet pancake topped with thick Nutella cream, crunchy nuts, soft succulent cherries and a soft cream cheese which cuts through all the sweetness with its light acidity. Doesn’t even sound half bad right?

Still, I wouldn’t ever advise anyone to actually make this dish, as it was just pushing the boundaries of what’s feasible. Think of it as a designers fashion week – nobody wears half fox wrapped around your neck in combination with sunglasses and rain boots, while otherwise being practically naked. It’s just to show creativity, push boundaries and crush the former status-quo. But if you’d ask me when you would be ever able to serve it to someone? Well, maybe at Halloween, or at a kid’s birthday party, or maybe to someone of your stoner friends who has the munchies…

If you dare to, find all steps and ingredients here underneath:

Make the sweet cheese by using this easy step-by-step paneer recipe, add a good amount of powdered sugar to the curds before pressing out the moisture.

Heat up 1 tablespoons of cream and 1 big heaped tablespoon of Nutella in a pan. Combine, let cool slightly and put in a piping bag. I used a ziplock bag. Let harden in the fridge until needed.

Bring 100ml syrup from jarred/canned cherries to a boil in a pot. Combine 1 tablespoon of cornstarch and 1 tablespoon of water in a cup, add to the boiling cherry syrup. Let simmer for 3 minutes until thickened. Add some cherries and let cool until needed.

Heat 1 cup of milk in a pot, add ¾ cups of sushi rice and bring to the boil. Keep stirring to prevent burning. Reduce heat to lowest setting, cover and let simmer for 15 minutes. Check occasionally and stir. Once cooked add 1 heaped tablespoon of Nutella. Stir to combine and let the Nutella rice pudding cool.

Crunchy toppings including something green

Make sweet pancake batter by mixing 125ml whole milk with 1 egg. In a separate container mix 100g self-rising flour (or 100g flour plus 1 teaspoon of baking powder) with 3 tablespoons of powdered sugar and 1 sachet of vanilla sugar. Combine wet and dry ingredients. Mix until smooth and let rest for 10 minutes. Bake 5 pancakes with the batter. Trim edges to make them look like perfectly round tacos.

Place a heaped spoonful of Nutella sushi rice pudding on each pancake. Top with cherries and some syrup. Sprinkle with cheese, nuts and rice powder, afterwards drizzle with the Nutella-cream. 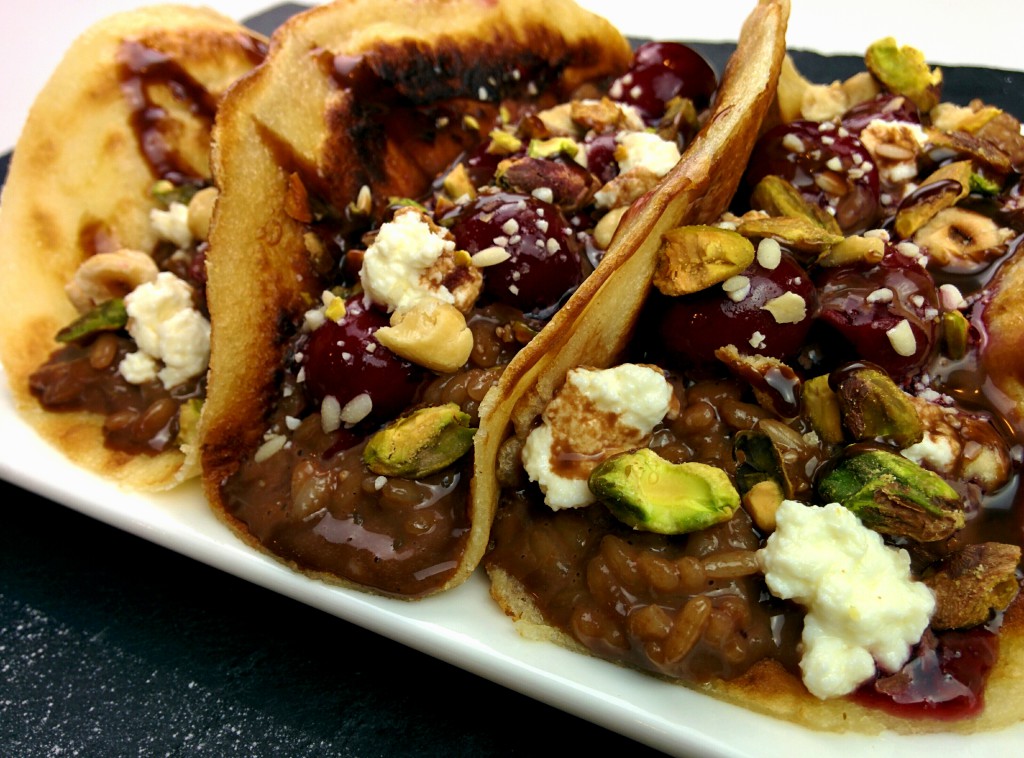 Check out Fiya and Jordan on Instagram to see what they cooked up for this little challenge! It all starts with a weird idea on paper!

Do you like the creativity of the dish? Got disgusted just reading this? Want to join in on similar challenges? Let me know in the comments below!