Encountering dumplings, beer and a dragon in Slovenia! (Ljubljana)

My goal for this year is still to travel 8 times. Since I fell in love with eastern and central Europe I chose for Slovenia as destination number 7. What a lucky call that was! The small city is awesome and I’d love to go back already. It’s fun in so many ways and I just had a great time with all the people I met on my journey. At the very end of the post you will find my top 3 places to hand out in the city!

Truth be told, I had no idea what to expect when I booked my trip to Ljubljana, well, I did not even know that it was the capital of Slovenia to be honest. Yes, I slacked a bit during the geography lessons in high school… The good thing however was that I went there with a complete open mind. Okay, that’s not really true. I had my prejudices…

Even before landing at the airport I just saw that beautiful countryside! The country is mostly covered by forests, mountains and rivers. As soon as you end up in the capital Ljubljana you get the feeling that it just took the best parts of several other countries and combined it into something stunning. The best way to describe it: It feels like the Czech Republic had a baby with the Italian mailman, but the Austrian father never noticed. Day 1 – Arriving after another sleepless night

Given I booked a pretty cheap flight through Transavia which was already at 6 in the morning I took the last train the day before and worked through the night at the airport. When I arrived in Ljubljana I dropped my bag at the hostel and went out for some breakfast. I did my research beforehand and put together quite a list with restaurants and dishes to try. My first breakfast was one of the many quiches at Bazilika.

Afterwards I stumbled around in the city trying to find my way around. With my phone being dead and my body lacking sleep for 32 hours at that point I went for a craft beer at Žmauc and a borek at Hollyfood Delight. Consequently I just crushed into my bed and took a nap for a few hours. 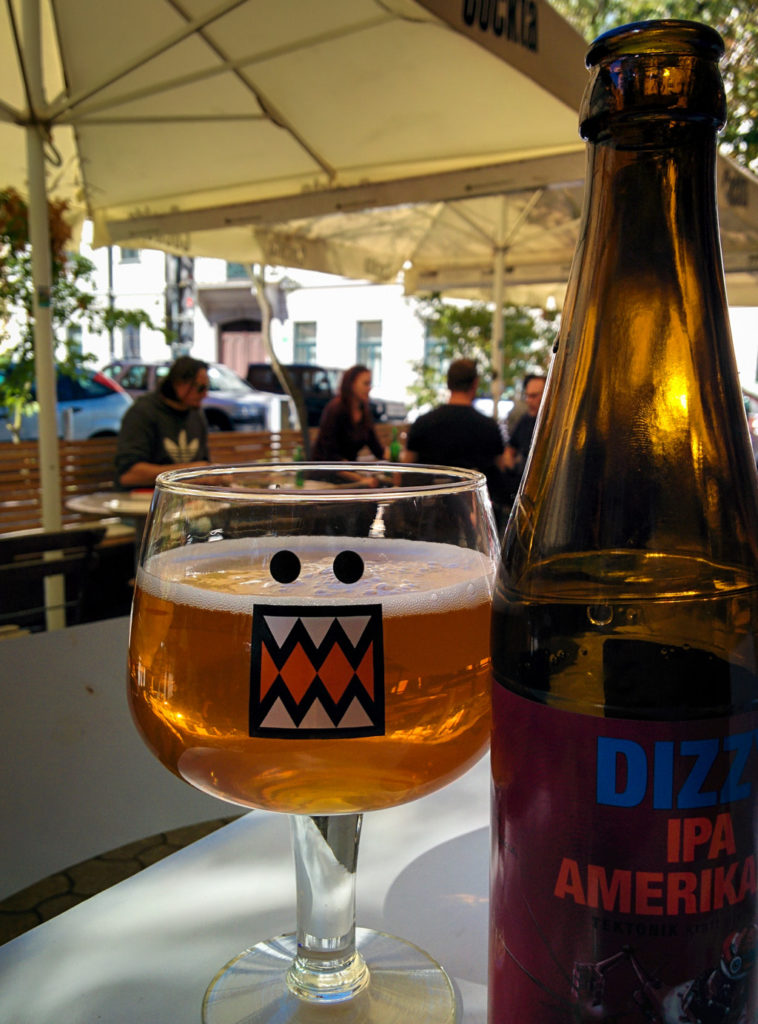 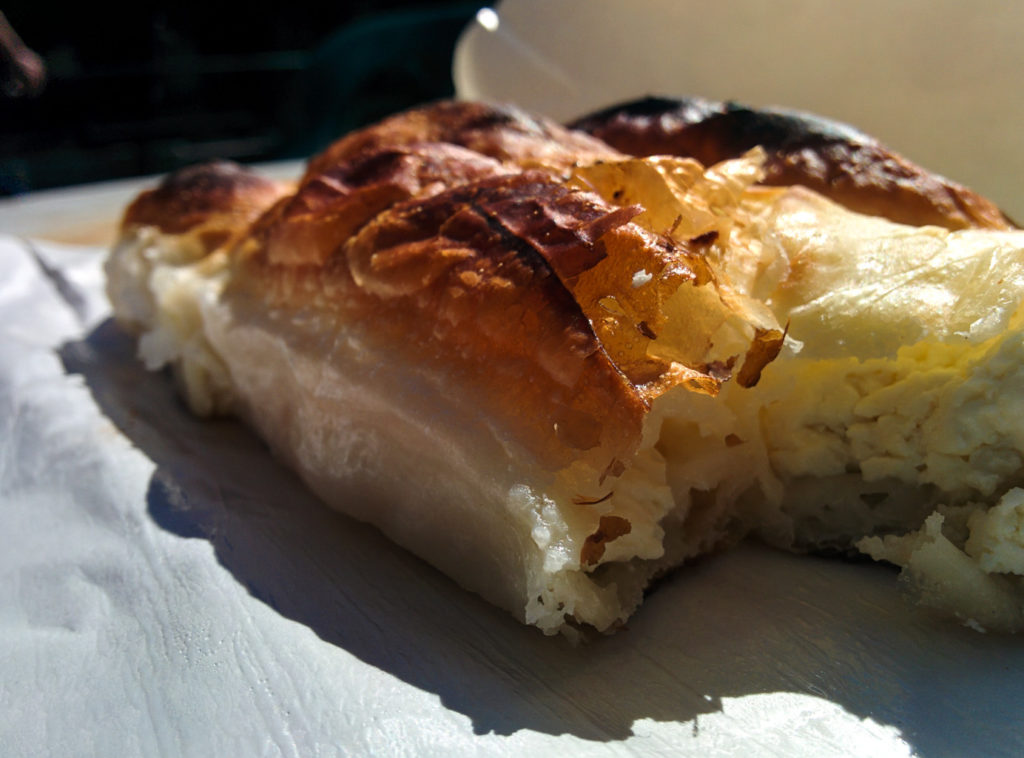 For dinner I went to a restaurant called Druga Violina – also known as ‘The second violin’. Someone already had mentioned that restaurant as hidden gem online, but given the girl from the hostel reception recommended it as well, my destination was set! Appetizer was a traditional beef broth with liver dumplings, main dish was awesome homemade pasta with prosciutto and truffle, and for dessert I had Slovenian sweet dumplings. All three were really tasty and raised my hopes more fun food adventures in the next days.

Day 2 – Doing all the touristy stuff!

The day started off with some bitter-sweet breakfast. Another quiche at Bazilika and next to that I got some barley coffee. What’s that you might ask? (So did I…) Back in the days when people in Slovenia couldn’t get their hands on coffee beans they looked for alternatives. That’s when they just made coffee from barley! (Which is therefore decaf) Flavour-wise it was okay, the taste reminded me of something familiar, but I still can’t really put my finger on it.

After my breakfast I did the free walking tour. Ina was just a fantastic tour-guide! She told us all about the weird and random historic facts of the country and the city of Ljubljana. Did you know that the dragon that is supposedly protecting the city was originally just a swamp monster? During the tour I met Alana who was staying in the same hostel I was at. After the tour we walked around and where in luck because Friday is the open-kitchen day with loads of street-food stands. One of the local Slovenian delicacies is horse meat, so I got myself a nice horse meat burger. Don’t judge me; there are 11 countries in the world that are known for preparing and eating horse. As Andrew Zimmern always says: “If it looks good – eat it!”

Afterwards, we walked around some more and went up the Nebotičnik skyscraper (which is only 12 floors by the way). Next to it there is a café renowned for serving one of the best traditional Slovenian layer cakes. At night I went out with some people from my hostel to Metelkova – the alternative part of town also known as ‘Little Berlin’, filled with several clubs and bars. We ended up staying there till the early morning hours.

I woke up hung-over at 1:30 in a completely empty room. All beds where empty and all bags were gone. The cleaning lady gently woke me up with the soothing sound of the vacuum cleaner. I went for brunch at Kaverna Rog and treated myself to a nice crunchy and gooey croque madame, espresso and pineapple juice. Afterwards I walked to Metelkova again to see it in all its grungy beauty during the day. To be honest, it was less impressive than expected. In my opinion the place has a lot more (grungy) charm during the night. Next stop: Hiking up to the Ljubljana castle. Damn, they got steep hills in Slovenia… The view from up there is quite nice, but to be honest the view from the “skyscraper” is better. Especially because you can see the romantic castle from the skyscraper, rather than the unromantic industry and flats you see when looking down from the castle. 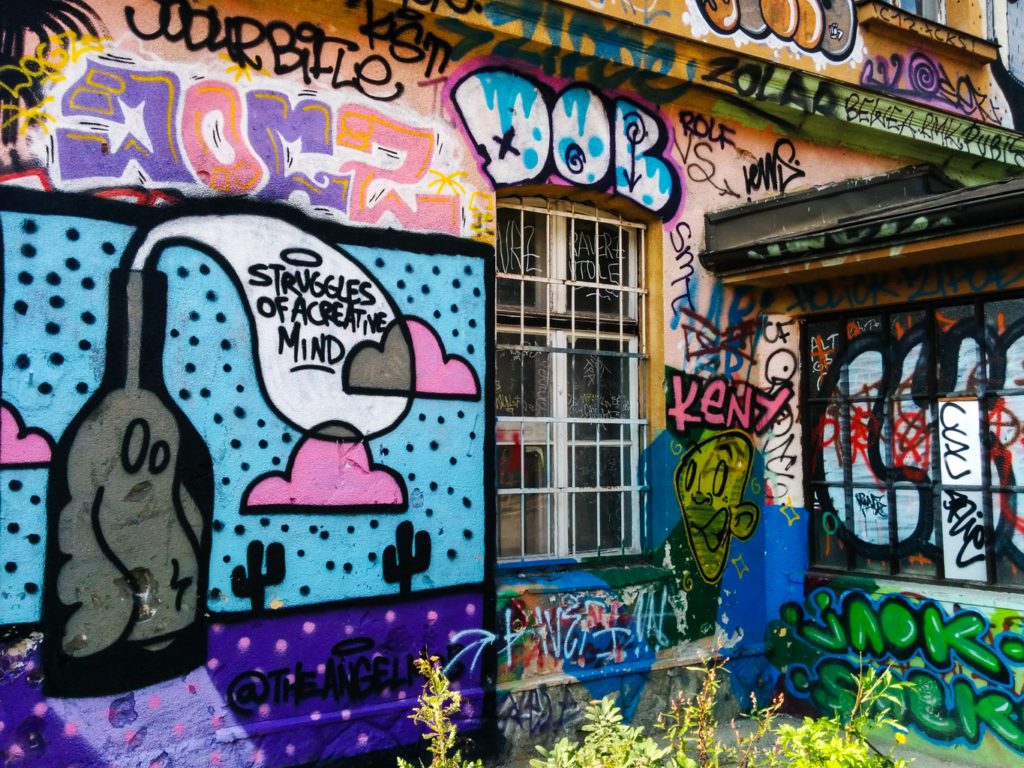 After Metelkova, I treated myself to another beer and some fried calamari! At night I went out with some people from my hostel and ended up at Metelkova again, which was quite deserted at Saturday unfortunately. So afterwards we were strolling around Ljubljana at 2 in the morning in search for some drinks.

Day 4 – Enjoying some nature without really going into nature

Having breakfast at my hostel and talking to a woman from Australia that has been traveling for 7 years straight. I don’t think I could do that… Seems weird to not have a home at all and just roaming around the world. Went to Zvezda café and had a sandwich called “Peter”, don’t know where that name came from. Dessert for my breakfast: A mini banana cake!

Since the weather was a bit cloudy and grey I walked to the botanical garden to hang out there. Even though I have been to a few ones, this one had a really awesome variety of pretty flowers, some urban bee-hiving, as well as some grannies in traditional clothing I stumbled upon in the backyard offering me free food. Who can say no to that?? (I couldn’t… because they did not spoke a single word of English)

It started to rain pretty heavily after I left the botanical garden, so I hang out at Špica Caffe to stay somewhat dry. Dinner was again at Druga Violina, where I had some scrumptious dumplings, delicious wine and mediocre gibanica. Well, you can’t have everything.

Tip of the day: Don’t go to the Museum of Illusions if you are hung-over…

Woke up to step into my wet shoes again and walked into the city center for some brunch. Gostilna Dela is a local favorite when it comes to brunch. I ordered “Jota s šinkom” – hearty sauerkraut soup with local ham. They served fresh crusty homemade sourdough bread with it, which to be honest was one of the best breads I had in the last year’s.

Had some coffee and worked on my second book afterwards. Ever had the problem that you had to choose between 20 different varieties of coffee beans? Go to Cafetino for awesome coffee and very knowledgeable staff!

Off to more food! I headed to Allegria – again a restaurant someone called a hidden gem online. For lunch you can get 3 courses for €6-8… Well, that’s a bargain! Local wine is €1.50 a glass by the way. You have no idea how good Slovenian wines are! There is a reason why you don’t – it’s actually so good that they only export 10% and keep 90% for themselves!! I’ll definitely keep my eyes open if I can find some here in Amsterdam somewhere.

I actually came back for dinner to the very same restaurant! Their food was just really good, as was the wine they served. Problem was: The same staff was still working there. Just feels really weird to show up twice in one day and with the same people still being there…

Recap: What can I make of Ljubljana, Slovenia?

I had literally no idea what would await me, when I booked my flight. But I can honestly say, Ljubljana is just perfect for a long weekend away! The city is beautiful and romantic, the people are really friendly, and the wine is great. I really regret not being out in the nature more… Everyone I spoke was really enthusiastic about it and there is tons of stuff to do outdoors! Next time, Slovenia, next time!

The idea was to take 8 trips this year – Ljubljana was #7, but #8 is already booked! I’m going back to Portugal at the end of the year. This time to the South – let’s see what Faro has to offer!

PS: My three favorite places in Ljubljana to just hang out and/or work:

Žmauc: A really relaxed bar with an underground vibe. They are playing mostly Cypress Hill like hip-hop as well as drum&bass most of the days. On top of that, they have an evening with open decks offering a space to showcase your DJ skills. And yes, they have a very 420 friendly clientele.

Zlata Ladjica Pub: Selection of about 100 beers – mostly craft beers, as well as the awesome deep-fried calamari you saw further up.

Cafetino: Just the best fresh ground coffee! If you are a fan of a strong cup of joe, you should definitely check this café out! They have over 20 different beans and you can get your coffee whatever way you like. Want to take some beans with you home? Most sell for about €2.50 for 100g.

Have you ever been to Ljubljana, Slovenia? Leave a comment and tell us all about your favorite places there and all the stuff I missed to do when I was there!